If we’d have to describe Karađorđe’s Park through a series of phrases we would choose the park of wartime memorials, dogs, white coats and football hooligans.
Karađorđe’s Park is considered the founder of public green spaces in Belgrade. The first deliberately planted chestnuts and acacias date all the way back to 1806. Today, the park covers a modest area of 3 acres on the Vračar slope, edged by two thoroughfares – Neboysha’s street and Liberation Boulevard. 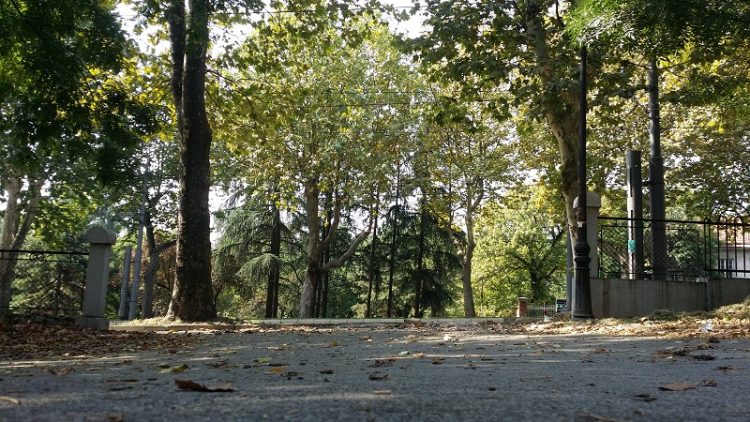 The main path goes full length of the park. The foliage that encircles it is almost like a fairytale alleyway. And just a couple feet away from this idyll, an endless stream of buses, cars and trams climbs up the street towards Slavija square

If you are of Turkish origin, or happen to have sympathies for the Ottoman heritage you might be imbued by a slight dose of discomfort in this park. Pretty much everything about the park and its surroundings is wrought with symbols of liberation from Ottoman rule. Even Neboysha’s street vaguely resonates with struggle for freedom, because the name translates as Dreadnoughts street. 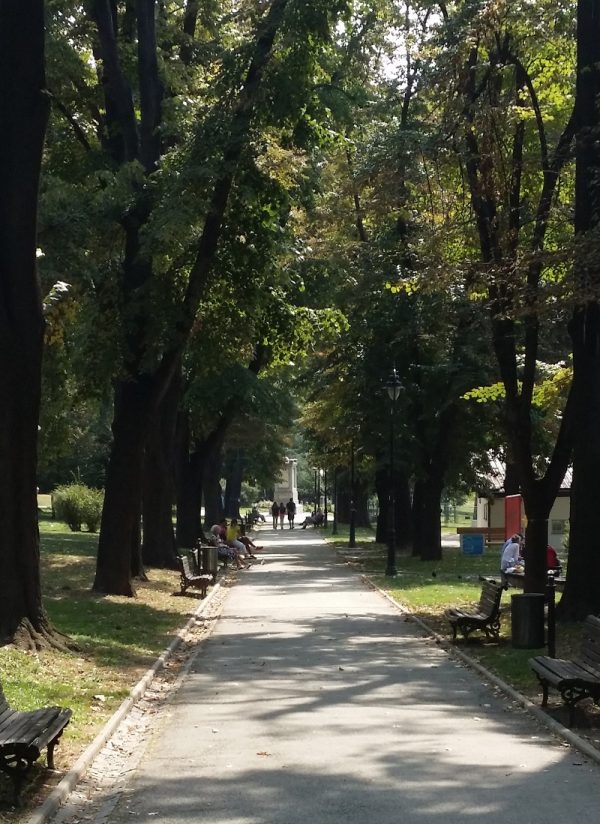 The central person of this park was definitely a dreadnought. A guy the Ottomans considered a terrorist and Serbs a liberator. Black George (turkish Kara George) is the inadvertent founder of the park and the whole story of the park began with him.

The place where Karadjordje park is today is a place that has quite a bit of historical significance for the Serbs. It was this very spot that Karadjordje’s army chose for a camp, before they went to retake Belgrade into Serbian hands after a 350 years hiatus.
At the far end of the park, there is a dozen stone memorials, very much like tombstones. There used to be more of them, but they got damaged during the construction of the underground tunnel beneath the park in the 1970s. That’s where the Karadjordjes  comrades, fallen during battle at Kalemegdan Fortress have been laid to rest.

The first memorial in Belgrade (that survives to present day) 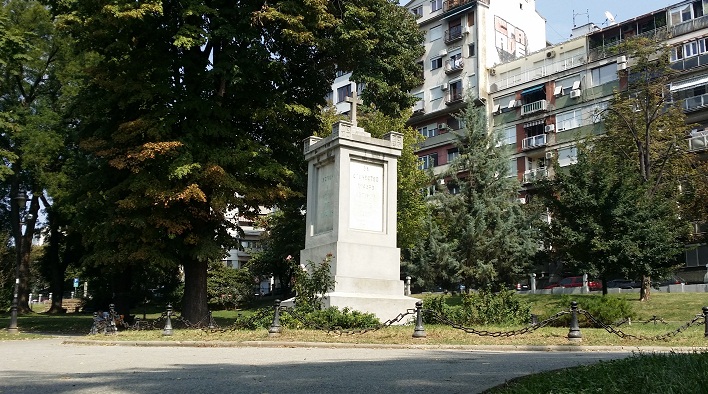 Karadjordjes son, Prince Alexander, probably deemed that the few scattered tombstones did not honor the sacrifice his father and his compatriots have made in an adequate manner, so he ordered the erection of a larger monument in 1848. This monument is the first of its kind in Belgrade (although some claim it is Vozarev Cross). It survives to this day, 5,5 meters tall, with an inscription in  very archaic version of Serbian. It reads: For the glory and honour of the Serbian heroes who lost their lives in 1806.
It is around this very memorial, that the park grew out of. After Knez Miloš Obrenović (ruler of a different dynasty) returned to Serbia, the park was slightly forgotten – but not for long. Once his son, Mihailo Obrenović heired the throne, the mayor of Belgrade was ordered to get the park back in order.
According to the chroniclers, it was once again forgotten, so even the third descendant of the Obrenovich dynasty had to intervene. In 1889 he ordered to have the monument thoroughly renovated and eventually, during the preparations for the celebration of 100 years of liberation some slightly more ambitious plans were made.

Albeit with a four year delay, the park was thoroughly renewed and expanded. A Society for the beautification of Karadjordje’s Park and its surroundings was founded (and resided in the nearby building in Nebojšina 39). Their efforts have brought about significant improvements. The soil was leveled, the paths were covered and the grass was laid down. Soon after, rows of Tilias, chestnuts and ornamental plants followed and the live fence was placed along the edges of the park. Thujas were planted around the monument. 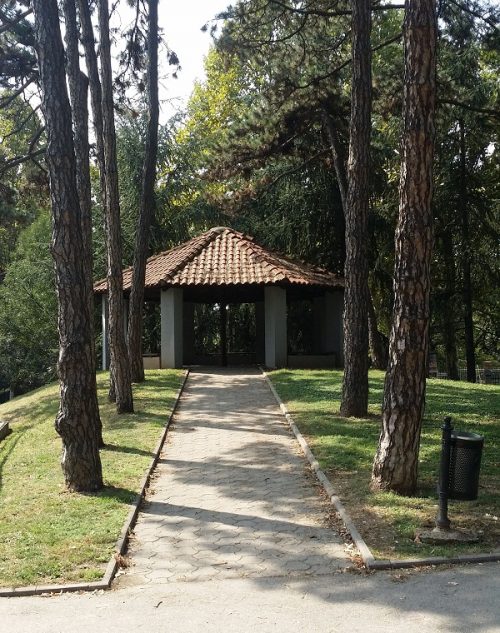 Another thing the propped up was a lovely little arbor that stands in the park up to this day. A small playground was recently added to it and at night the arbor becomes an unofficial intoxication spot for groups of local youths.
After the First world war, when the Austrian army desecrated Karadjordje’s monument in Kalemegdan, the Society has initiated the building of a new monument in the memorial Park. It was at that time that the park was officialy named Karađorđe’s Park because up untill then it was known as Vozdovacki Park.

The new memorial for Karadjordje, however, was not erected there, but the park did acquire another national-warrior-monument. This one was dedicated to the so called “third callers”. Back in the days when great powers clashed on Serbian soil on a regular basis, the conscription was obligatory and it went in three cycles 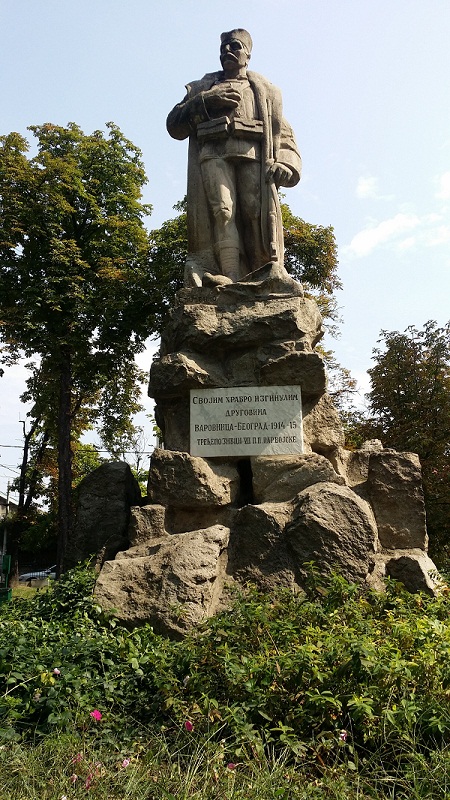 The first call was for the regular army. As soon as their numbers were reduced, or the need for additional defenders arose,  the second call went on  to mobilise all men under the age 45. The third call went to those those older than 45, and it was the bravery of these hardened old men that won many battles in Serbia’s tumultuous history. The survivors of the 7th infantry regiment that fought during the First World War and the Ministry of Defense patron ed the Monument and the sculptor was Stamenko Đurđević 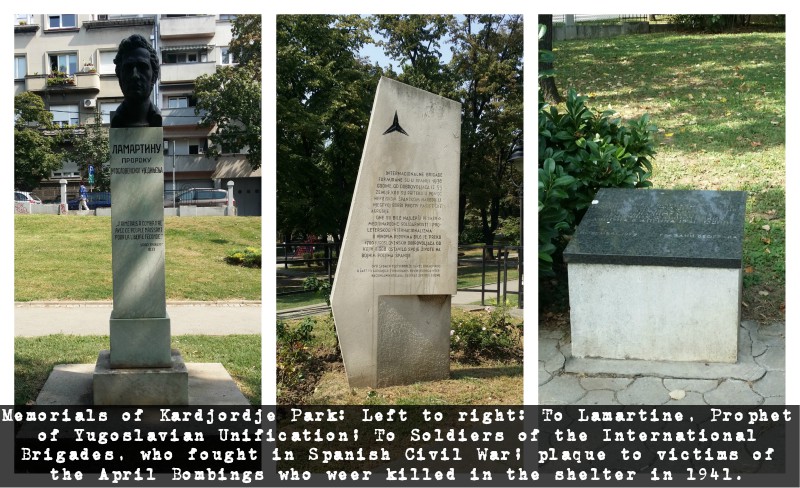 As if history was only warming up, in the decades that ensued two more memorial had to be put in the park. It’s no wonder that some call a walk through Karađorđe’s Park a hangout with the witnesses of the past. The first of the two is the bust of a French novelist and politician, Alfons de Lamartine, who was a staunch supporter of Serbian liberation from the Ottoman rule in the 19th century. The inscription below it reads To Lamaritine, the prophet of Yugoslavian Unification.

The second is the monument to International brogades, who fought in the Spanish Civil War. Of the 1700 volunteers from all parts of Yugoslavia, 800 have died.
The importance of these historical events in the forming of Yugoslavian identity was pretty huge. Two side streets  were named after them  to emphasize the fact

The events of historical importance have not circumvented the Park in the years that followed either. Before the onslaught of the II world war, an air raid shelter was built in the park. During the German bombing in April 1941, it took a direct hit and 192 Belgraders have lost their lives in it. The place of their cavalry was marked with yet another memorial plaque.

So where is the host, then?

Paradoxically, the Park hasn’t got a monument to Karadjordje. There is one nearby, on the plateau in fornt of the Saint Sava temple, which is why some people call that bit of land Karadjordjes Park.

Scarcely any other park in Belgrade is as guarded as Karađorđe’s Park. As it is, you get to see a dog at any time of the day. The residents of the surrounding buildings have an awkwardly high percentage of people who favour canines to other forms of pets. In Karađorđe’s Park, they get to walk beyond the fenced-off area intended for pets and they usually do it in packs just like their respective owners.

Owners neglect and inattentiveness combined bring about a cloud of unpleasant smells radiating from the park . Luckily, it gets bad only during the summer months, when the heat manages to sneak past the lush foliage.

The topic of dogs is a conversation starter for the inhabitants of that part of Vračar. Believe it or not, the joyful running of a pack has caused serious rows between neighbours. Most have ended up with physical clashes of the owners. So, you don’t get to see a dog fight in Karađorđe’s Park , but dog-owners fights are quite common.

Students – the doctors of Karađorđe Park

Stuck between the Veterinary Faculty and the Faculty of Stomatology, and right across the street from the Medical Faculty , Karađorđe’s Park today is camping spot for different types of warriors. The future doctors and vets come here when the weather permits and lay their whitecoats on the bench-rests while they read thick textbooks and endless piles of notes. They sit there for hours in their preparations to become the healers of the future. Sometimes they start early on – and help out a passer by, exhausted from the heat, or give a word of advice to one of the many dog owners.

In the past couple of years, another form of facility started entrenching around Karađorđe’s park. Five different, increasingly popular, wining-and-dining establishments appeared at the bottom of the park. The smells of Lebanese, Italian and other contemporary culinary specialties lure the passers by, and both sides of Neboyshina street now have beer and wine gardens. This gastronomical offering is much appreciated judging by the number of visitors, many of whom belong to Serbia’s public life. And the loaded upstarts.

One thing you get to feel in Karađorđe’s Park every now and then are tremors. It happens three or four times on a weekday and less often on weekends. It ‘s the passing of the underground trains (BeoVoz – BeoTrain in translation)  and one of three stops that have been dug underground bear the name of the Park. Although it is not the mainstream form of transportation, hundreds of passengers pass it on a daily basis. The station is right underneath Franchet’s, and the Park. If you ever see people inappropriately attired for jogging and running like mad through the park, they are quite probably trying to catch the train.

The proximity of football stadiums of two biggest Belgrade sports clubs (Red Star and Partizan) make the park an almost inevitable meeting spot for supporters of both clubs. There are times when the gathering starts in the early morning and untill the actual game starts hectolitres of beer are drank there and the supprters practice singing their stadium chants, It is the least pleasant time for the actual residents to go out in the park, as it becomes a football stadium stand that reeks of alcohol and pzrotechnics. Even if the park had twice as many garbage cans they would not suffice at the time , or so it seems. 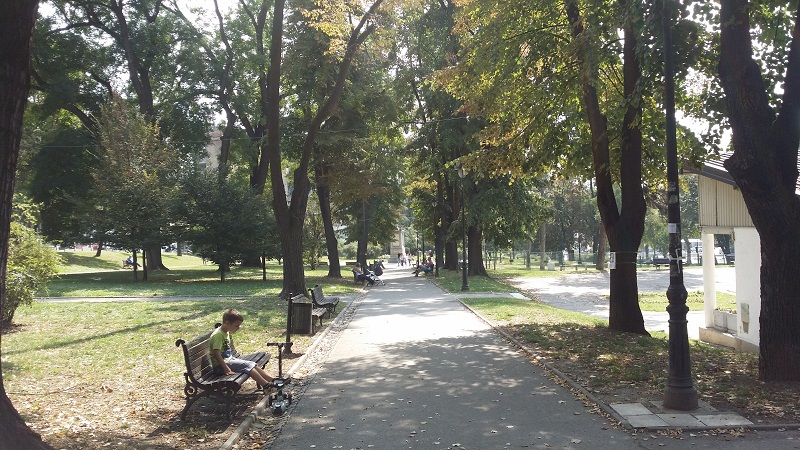 Karadjordje’s Park is also pretty well maintained for Serbian standards. The reason for it is the small white shack in the central part of the park. The society for embellishment is long gone, but the City Greenery Enterprise has a checkpoint in that little house. It used to be a pioneer’s squad meetup spot, and it even had a small pool in front of it. In 2003, the pool was buried and paved and the whole park was once again reconstructed. The authorities have been keeping it from the test of time ever since.
We hope it stays that way…