Local patriotism is inherent to most Belgraders. However, if people from all parts of Belgrade were to gather in one place to measure it, we are pretty sure that the pride of the inhabitants of Zemun would strikingly overwhelm all others. Without a grain of doubt. Because they live in “their own town”-  where the spirit of of Celtic Taurunum, Bulgarian Zemlin, Austrian Semlin and (let’s be frank) Croatian Kingdom under Austro-Hungarian rule coalesce in one.

Zemuners say that there are many parts of Belgrade, but there is only one proper town within Belgrade.And they are right quite right when they say it, because Zemun became a part of Belgrade only in 1934.

Just as you leave the wide perpendicular six lane boulevards of New Belgrade, and step into the narrow streets of Zemun towards the Council Hall, you will get to Zemun Park. This rather impressive piece of greenery spans from the Main street to Tošin Bunar on an eight hectare surface. It hosts one of the first Grammar Schools in Serbia, an elementary school, a Faculty, an army barrack, two churches and a sports Hall. 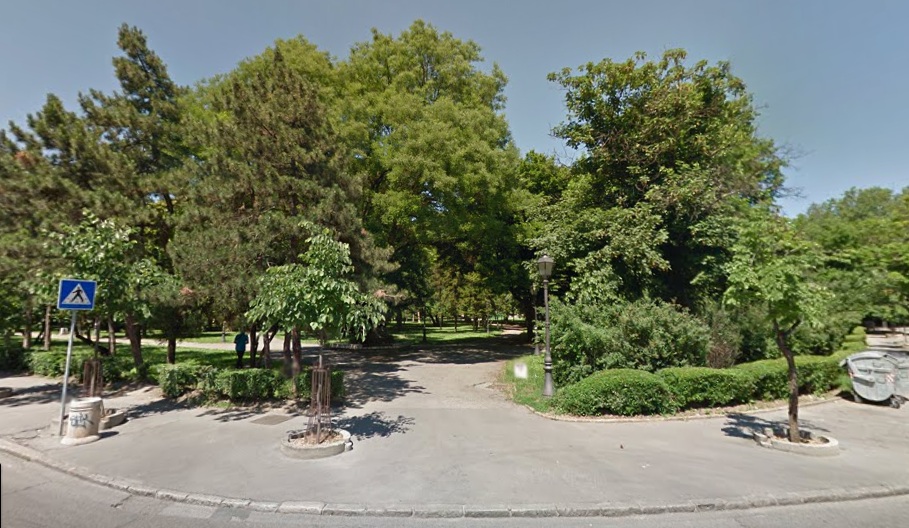 The park literally grew out of mud and together with Zemun. As its etymology testifies, they both are of Earth. The Slavic, Bulgarian word, zemlin- means made of earth.  And speaking of names, its official name isn’t Zemun Park either, but The Town Park in Zemun. Before that it was called the Small park, and then Elizabeth Park (after the controversial Austrian Empress Elizabeth Bavarian), but more on that is yet to come.

Just like all other parks in Belgrade, the one in Zemun also has a rather macabre history. To fully understand it one has to go back in time, when Zemun was still a part of the territory of Austrian Empire and Belgrade was under Turkish rule. At the beginning of 1700s, the Austrian Monarchy has just conquered  the plague-stricken central European parts of the Ottoman Empire down to the northern Balkans. After the peace accord Austria protected its borders with fortified structure that was very much alike  a Roman Limes. The army stood on its turrets guarding it from potential conquest but also from disease carriers.

As Balasz and Foley noted:

…health advisers of the Sanitary Court Commission in Vienna transformed maritime quarantine measures systematically to continental circumstances beginning in the late 1730s. A series of seaport type quarantine stations were erected along the border crossings of the main oriental trade routes combined with traditional cordon sanitaires by the 1750s. Military policing forces were responsible for isolating and purifying all suspected transmitters of diseases (persons, vehicles, goods and animals).

One of the convenient spots for trade between the two worlds were Singidunum and Taurunum (Belgrade and Zemun respectively). One of the aforementioned quarantines was built in 1730. And guess what? ‘Tis the exact spot of Zemun Park Today.

Contumaz (a German word for quarantine) was encircled by a really large brick wall, and its rim had a ditch full of stale water. It grew  All passengers and goods arriving from Turkey ro Austria had to spend a certain period of time in the Contumaz. If there was a positive sign of an illness, they would be quarantined in the barracks from 21 up to 50 days. The less fortunate were buried on a nearby cemetery made specifically for the purpose. Servants, who were not allowed to touch the inhabitants took care of them. However, the travelers paid for food and firewood. And if they tried to escape, the martial law would be applied.

An interesting trivia is that Zemun Park was an abode of many famous people in Serbian and world history. A Pleiad of greats spent some time there: Alphons de Lamartine, Karageorge Yoakim Vujich, Hans Christian Andersen. Father of the great Serbian poet Branko Radičević, Todor, also served there.

The remnants of the quarantine are the two churches: the Roman Catholic of St Rocco and the  Orthodox Church of Archangel Gabriel. The statuette of Alphons LaMartine stands between them, as if to deliberately symbolize the unity of south Slavic nations.  The Orthodox church is still active, especially on Christmas eve, while the Roman Catholic one has services once a month.

As such, Contumaz existed for almost 150 years.

Once It was abolished and the land was sold to Zemun Magistrate and Hungarian financial directorate. The land was neglected all until the 1871, when the City Council of Zemun, then free King’s town, issued a decree to rearrange the area into a corso. By May 1880, the then called Small Park, was opened to the public. It encircled the area around the school, and was later expanded into a park that we know and see today.

Together with the park, a series of buildings were constructed. The most prominent of them is the Zemun Grammar school. Its façade still bears an inscription Oberrealschule – or the grand realka – a seven year, German type school which was a project of Croatian Architect from Zagreb Nikola Kolar. The plaque that you don’t get to see is the one that was put there when the Grammar School was open. It read: During the reign of Franz Joseph over the Croato-Slavonic military frontier, to Baron Franya Filipovic Filipsbverski 1879.  For more or less understandable reasons, the inscription was removed right after the Serbian army liberated Zemun in 1918.

Whatever the case in point may be, there aren’t many schools in Serbia where the students get to have their school on the parks grounds. Especially a park like like the one in Zemun. Sometimes their PE classes take place outside the school grounds so the columns of boys and girls wearing white shirts run on the tracks between the monuments, churches, benches and the incredible 1300 trees, of which 15 have a status of heritage. It is also the place where other intricate evasion maneuvers of truants take place, when their teachers pass by. The usual gathering spot of students in front of the school is on the fat branches of 100 year old Pterocarias. 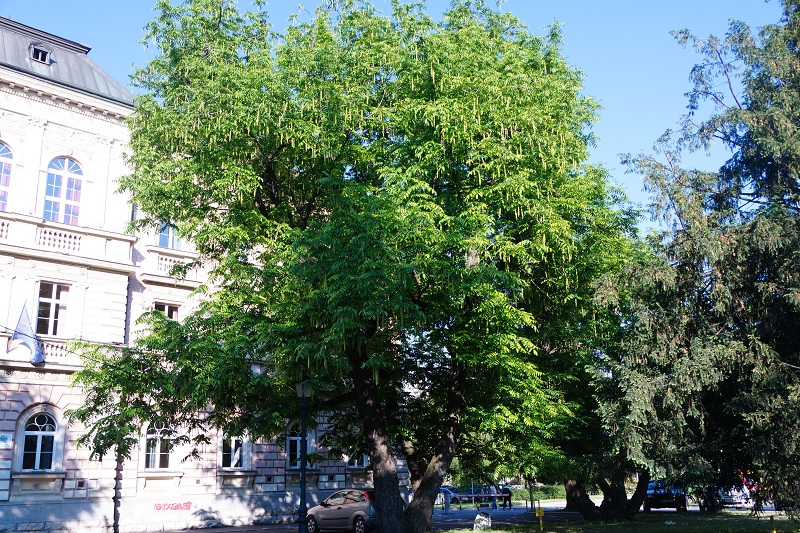 The less conservative teachers sometimes have their classes in the park. Choir rehearsals also take place in the park from time to time, and it is not a rare occurrence to see a self initiated group of students with a guitar who sing their way into the dusk. But if you pay careful attention you will notice that the music never stops in Zemun Park. The sounds of piano, violins and operatic voices resound all day, from the neighbouring Kosta Manojlovic School of Music. The students of the Faculty of Agronomy also prefer the park to their university Library.

The cheerful atmosphere of the whole ground is nothing like the time when it was a quarantine. But as soon as the night comes, things change a bit and park becomes the playground for all sorts. 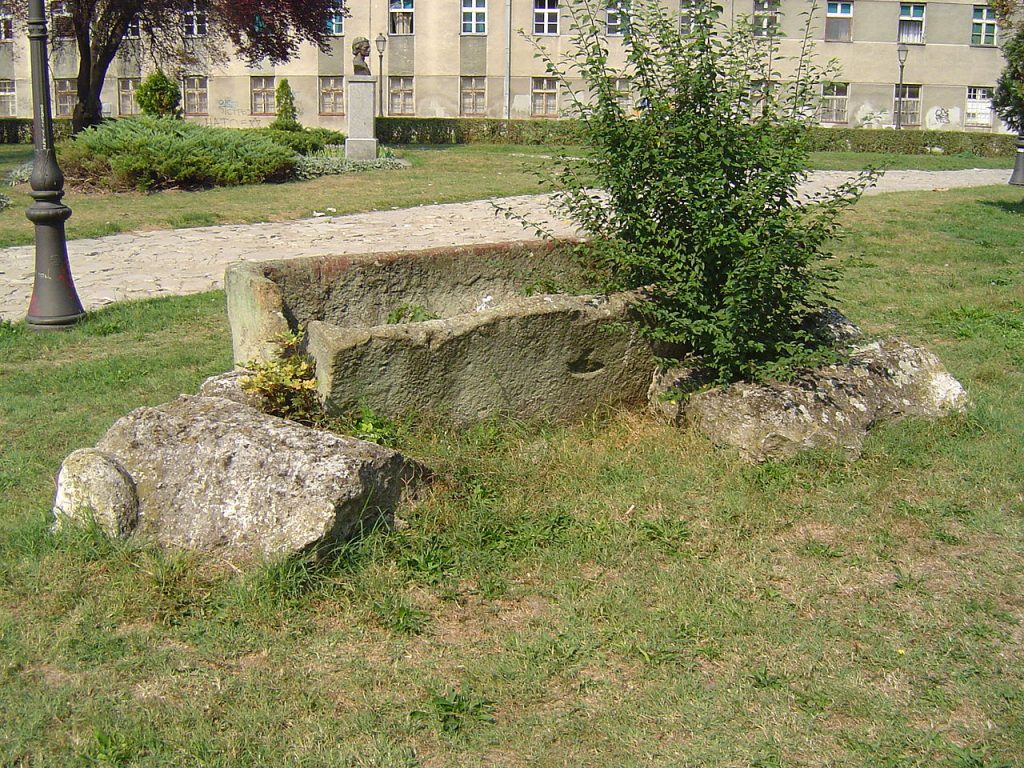 And while the City Fathers race in media in their declarative efforts to preserve the Roman Sarcofagus that keeps deteriorating on the grass, the passers by nonchalantly walk past the wall of what used to be a quarantine. The students of Zemun Grammar School Still believe in an urban legend that building used to be an all-female prison, which later on expanded the demographics to both sexes. 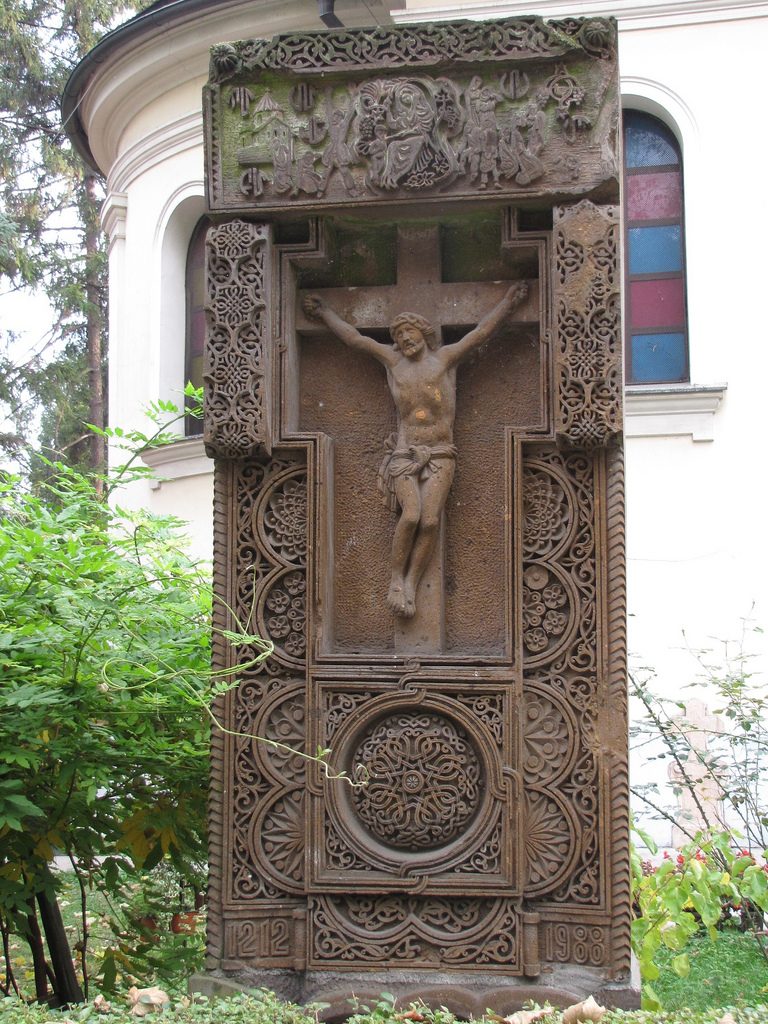 Unfortunately, is not the only one that is in need of attention. The memorial to Lamartine, who spent his time in the Kontumatz has also seen better days, and the same goes for the bust of famous Serbian poet Branko Radichevich monument and the really unique Khachkar – Armenian cross-stone, work of Armenian sculptor Ruben Nalbandyan. This very unusual relic was a token of remembrance to the 7 Serbian Pilots and mechanics who lost their lives in a plane crash while trying to bring relief to victims of the earthquake in Armenia in 1988.

The park in its entirety, looks better than most others in Belgrade – it is a source of pride for the whole of Belgrade. That’s why it is in Zemun…