It is as central as it can get. Couple hundred feet away from the pyramid that designates the spot where the geographical coordinates of our (anything-but) White City meet. One of the favourite pub stories is that the pyramid is a Masonic symbol, but even if it were true, where else would a prospective mason put a symbol of Masonry? That’s right, the city center. Now, as much as conspiracy theories have been one of the favorite national past-times since the 1990s, we won’t be delving into them now. And we kinda overused the word center in this first paragraph anyway. 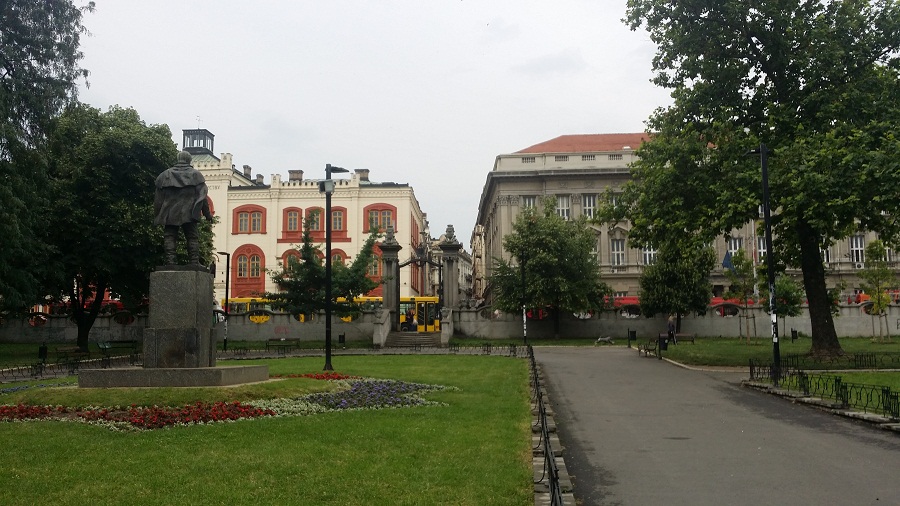 So, in the midmost middle of Belgrade (or Singidunum, or Nandofehervar, or Dersu-l-Jihad) is where the backbone of Belgrade University lies with its three shining stars: the good ol’ Natural Sciences and Mathematics faculty building, Philology and Philosophy Faculties and the Rectorate (which is, according to the finest Serbian tradition of absurdity, better known as a kafana than an administrative body). The “innkeeper” Vesa is gone now, and the kafana in the cellars of the Rectorate has gone to history together with him.

We do have the Students’ Park, though. Actually, its proper name is Academic Park, but Belgrade slang has been successfully neglecting the fact since the 1970s….

So to start from the beginning…

It’s been over two thousand years since Guy Aurelius Sext had been waking up with a pounding headache – ever since he was a hit by a labrys somewhere on the outskirts of the Black Forest. The German owner of the axe has been transported to the other world by Valkyrian Express shortly afterwards, and Guy had earned the right to smother his pub buddies with the story of the encounter till the rest of his life. Many years have passed since the battle and the Decanus has had a hard time getting accustomed to a life of a civilian. He’ll stroll to the market, or perhaps to Minerva’s Temple, or trot down to the Danubius to Mithras temple in a pagano-ligeous (disrespectful to a pagan deity) attempt to cast an eye or win over the pretty priestess Azar. Guy does not mind her babbling about a  different god, because if Mars did not smite him back then, with the axe and the look and the mustache that will forever haunt his dreams, he’s unlikely to do so today.

A couple of millennia later Loshmi puts on his dirty sneakers and runs out of his flat in Tzintzar Yanko’s street. Today is the last day for him to pay the tuition fee, and he woke up with a pounding headache caused by a combo of German Yagermeister and Serbian Vinyak in the kafana last night. He has to get to the ATM across the street from the National Bank to get the money and then run down Dushanova street to the Uni, just to say bye-bye to that money. Afterwards, he’ll get back to Students’ Park to sit down on a bench and slake some of the spring sun.

In case you wondered, we’re not completely nuts. The digression served to illustrate that both Guy and Loshmi tread the same path with a 20 centuries difference between them. Because after his visit to Mitra’s temple, Guy went to the market looking for some freshwater fish caught on the confluence of the two rivers. After that he sat on the same spot where Loshmi did. It’s just that  Guy didn’t have wi-fi at his disposal. 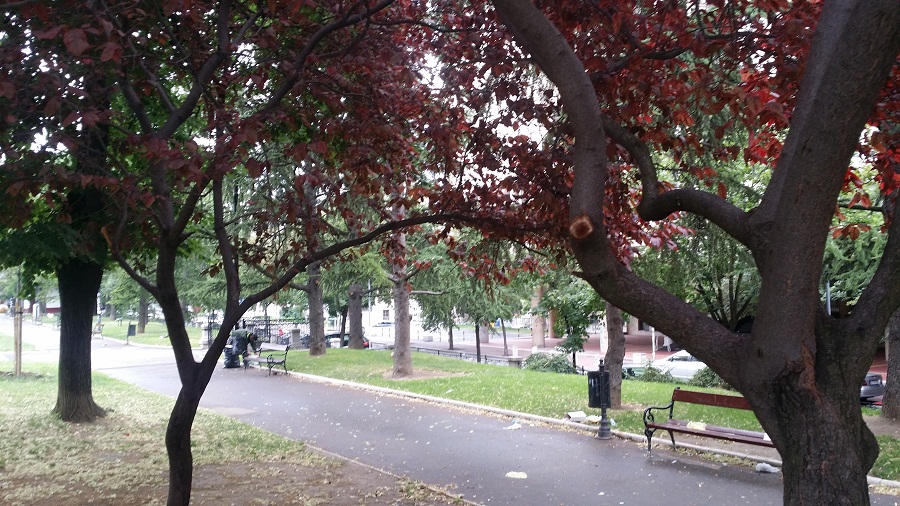 People who take their dogs for walk in the Park (or semi-occasionally their kids) are blissfully oblivious of those who had walked those very same paths throughout Belgrade’s fairly turbulent history. Quite a few others circulate around it as well, and that is by no means a novelty. As a keen eye may observe, it is from this location that the city spread and it’s no wonder that all of the city roads lead to it – and  from it.

Student’s square, (previously called Grand and later the Kings square) which holds the namesake park is the oldest in Belgrade. The space around the faculty of Defectology was once a shrine to the Persian goddess. Tzintzar Yanko’s street, just a few hundred meters from there happens to be the largest and the most significant archaeological site in the urban area of Belgrade, if we discount the Kalemegdan Fortress.

Tzintzar Yanko’s street is a remnant of a settlement, made out of those who were not allowed into the fortress. In Roman times, soldiers were not officially allowed to get married, so the unofficial wives with even less official kids followed the army and settled in the vicinity of the camps. Soon after the traders, craftsmen and solitary adventure seekers followed suit, and that’s how what we call Uzun-Mirkova street today, came to being. Together with Students’ Park, which was the market at the time.

It would have been slightly unrealistic to assume that the market conducted business uninterruptedly during that whole period. It only became the market again in 1865, when Captain Misha’s Mansion was built. The space around it was called the Grand Market near the Main Police station – which sounds kind of safe. Maybe not so safe if you know it was nicknamed The Mainer,  and that it had its own prison (Mainer was a slang term for the largest of the cells). Destabilizing elements were incarcerated there, and it became notorious in Second world war as place of torture.

Karma is a bitch, so it was burnt to the ground during the liberation of Belgrade. Eventually the Faculty of Sciences was built in its place and people who frequent it today slave away only to equations.

Around that time, was also the time when chevapchichi arrived to Belgrade – they arrived into a kafana At Raich’s. They form the part of national identity nowadays, and famous Serbian satirist odf the time, Branislav Nušić used to say that the meal united Serbs, Croats and Slovenes far more efficiently than politics or literature had.

Fifteen years later, a fountain was installed, and soon after the monument to Josif Pančić. That’s more or less the time when the space officially got the status of a park, and it was named after the famous biologist. The unveiling of the monument took a tad bit more than it was deemed appropriate, so the locals nicknamed it  the Park of the man in the Bag.

Sometime later on, a tram roundabout was built in front of the market so it became even more popular, in spite of the authorities intention to turn the space into a green area. The last market stand was removed in 1926. and eight years later, what was known as the kafana “The Uniting”, first became Belgrade’s Trading Chamber, and then the Museum of Ethnography.

In Belgrade, pretty much everything starts in a kafana. 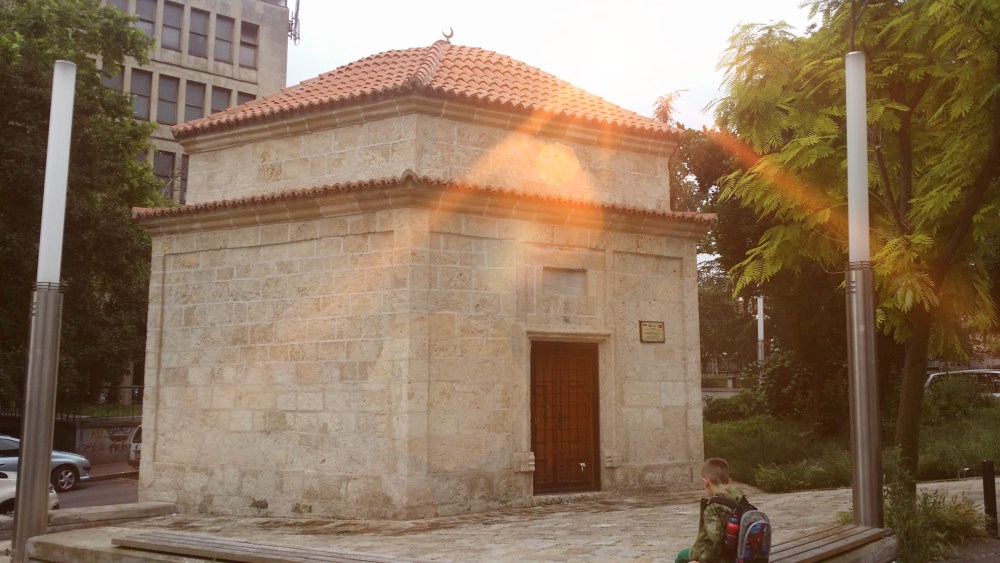 The medieval period, and the latter Ottoman and Austro-hungarian occupation suffer from a chronic lack of historical data. It is known for a fact that since the 16th century, the park actually served as a Turkish graveyard. The mansions and mosques that surrounded it, on the other hand, were an Ottoman  Beverly Hills of the times, as most of the Turkish nobility settled there. The only visible remain from the period is the Shaikh Mustapha’s Tomb at the top end of Vishnjiceva street. It belonged to Kizlar Aga’s Mosque, which was demolished in 1875. Ironically, the market seems to have existed parallel to the cemetery on more than one occasion and the actual cemetery was not  displaced till 1867.

It was at that time that the academic center of the capital began developing, but in order to get the young gentlemen to study their sciences, there was a tiny problem to be resolved.

Yep, Belgrade had a problem with illegal taxis even before automobiles were invented. 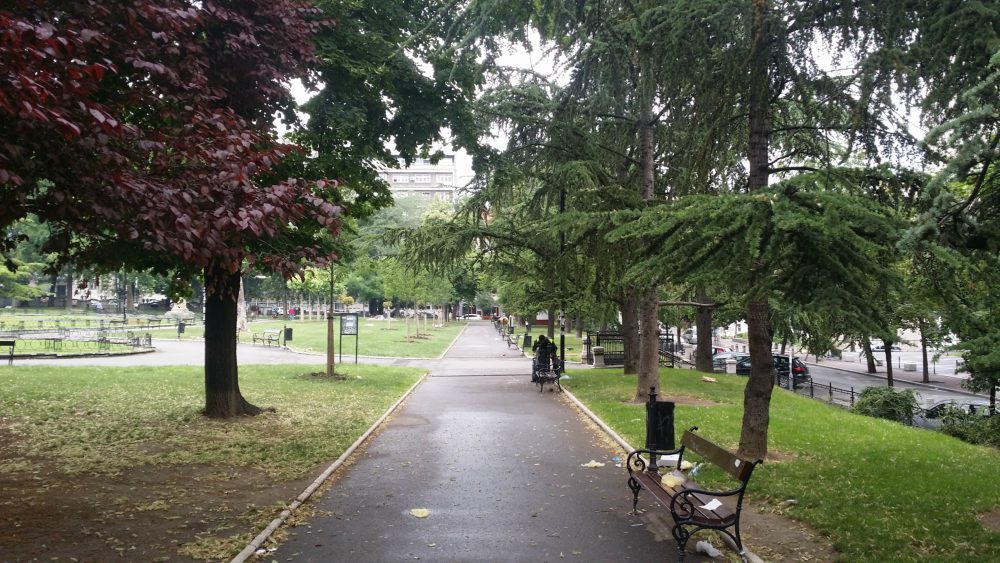 Carriage station which was in front of the Park, and the dangling of carriages and the horses snorting disturbed the future scholars.They had to be moved elsewhere, which they did. However, it may not have been just the concern about the future thinkers of Serbia, but also the fact that surrounding streets were inhabited by the members of the royal family.

It seems that the move was just temporary as there is a taxi-cab station on the very same spot nowadays. Master Yevrem who used to live nearby is long gone and hence there is no one to solve the problem at present day. 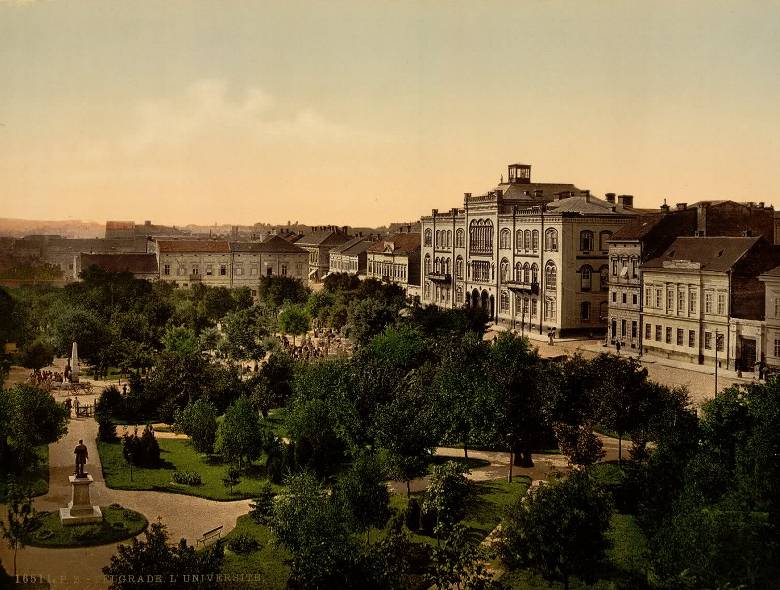 Just before the outset of the Second World War the Park got its second monument – dedicated to Dossitay Obradovich. For those acquainted with the works of the man, it would suffice to say that he was probably the last great enlightener among the Serbs. There is a popular aphorism which explains how great his role was:

Mr Dossitay Obradovich was the bringer of enlightenment, education and potato seeds to the peoples of Serbia. It is said that the people have accepted the potatoes quite well.

80 years later, Jovan Cvijich joined in. Crème de la Crème of Serbian science and free thinking in one place and Dossitays statue stepping forward with a hat in his hand just as if he’s getting ready to continue his path of enlightenment. 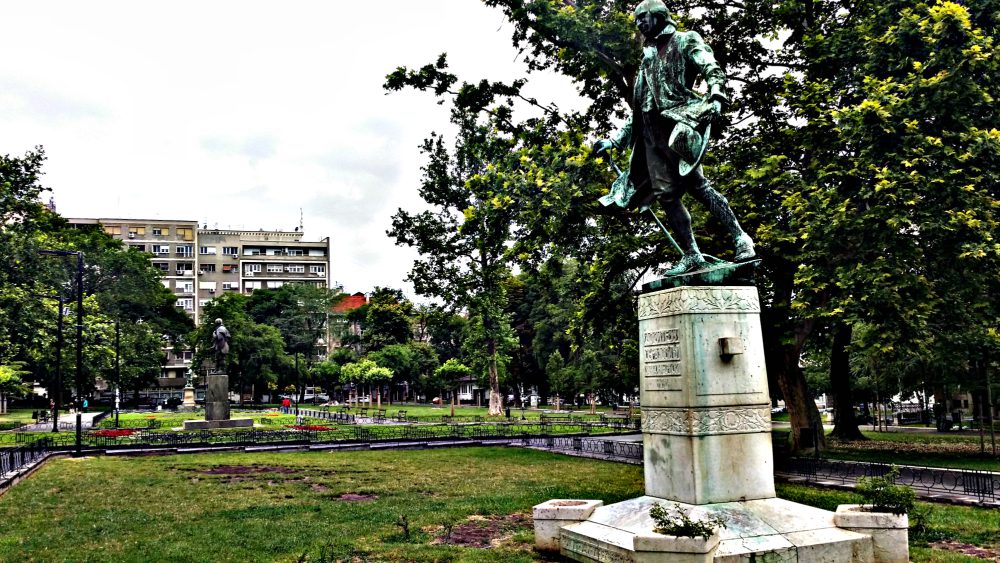 Between the two wars, the first thing that was built was the new building of the University which became the Faculty of Philology, and soon after Kolarac Endowment building also sprung up. More or less, it was at the outset of Second World War that this space, as far as architecture is concerned, got its today looks. The only thing that’s missing is a Turkish Han, which was adapted into a hotel which was demolished in 1968. That spot place is nowadays known as the Plateau in front of the Faculty of Philosophy which has been the gathering spot of Belgrade’s subcultures for quite a while now. It’s been endowed with a monument to Njegosh’s since 1994.

The most vivid moment of the more recent history of the park is the Students’ Protest in 1968. Some others ensued, but students tend to stop whining when they graduate, so the park today, after its reconstruction in 2012, happens to be one of the most pleasant places in town. Which, to be honest, is nice for a change, after the stigma that it bore for many years in the 1990s. If the park had an announcement of what the previous puproses of the space were, the people might stop coming and definitely confirm the cliché of the Turkish Cemetary

“As if passing by a Turkish cemetery” is a an idiom that took root among the people of the Balkans. It is synonymous with “paying no attention to”, “not even looking at”, or “deliberately neglecting” and is rather illustrative of the general attitude of those who weren’t converted to Islam during the Ottoman rule)
.

During the “beautiful nineties”, Students’ Park was fondly nicknamed Narky-Parky, and a place to be avoided even during daytime. Cheap narcotics of murky origins could be bought from even murkier characters, and every plainclothes cop would have been spotted from miles away (junkies don’t polish their shoes for goodness sake). 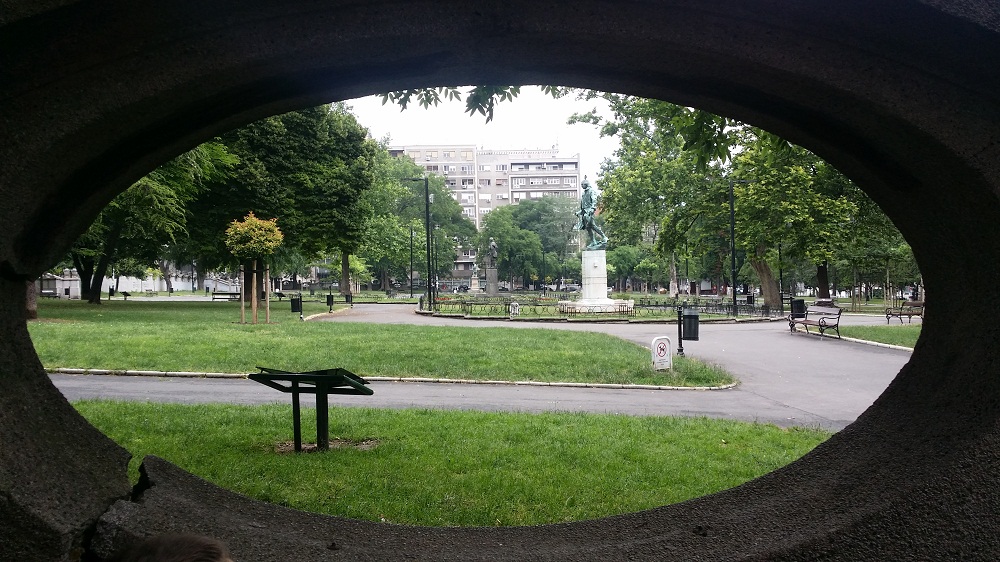 At dusk you would regularly bump into cliques of subcultural youths, warming up with legal opiates, before they went on to Academia.(an underground club in the cellar of the School of Arts at the end of Knez Mihailova street)

It’s quite intriguing that this crimogenic little parallel universe came to being on the spot where the intellectual future of a state was supposed to flourish. The academic reality co-existed with a reality that was its pure opposite. Just a manifestation of the consequences of its environment in which this park has existed for centuries.A piece of a great historical mosaic, which collected the memories of fresh, and some slightly less fresh events and it tells its story to those who wish to listen…

Story of empires that have ceased to be, while rippling shudders of those that have yet to come. 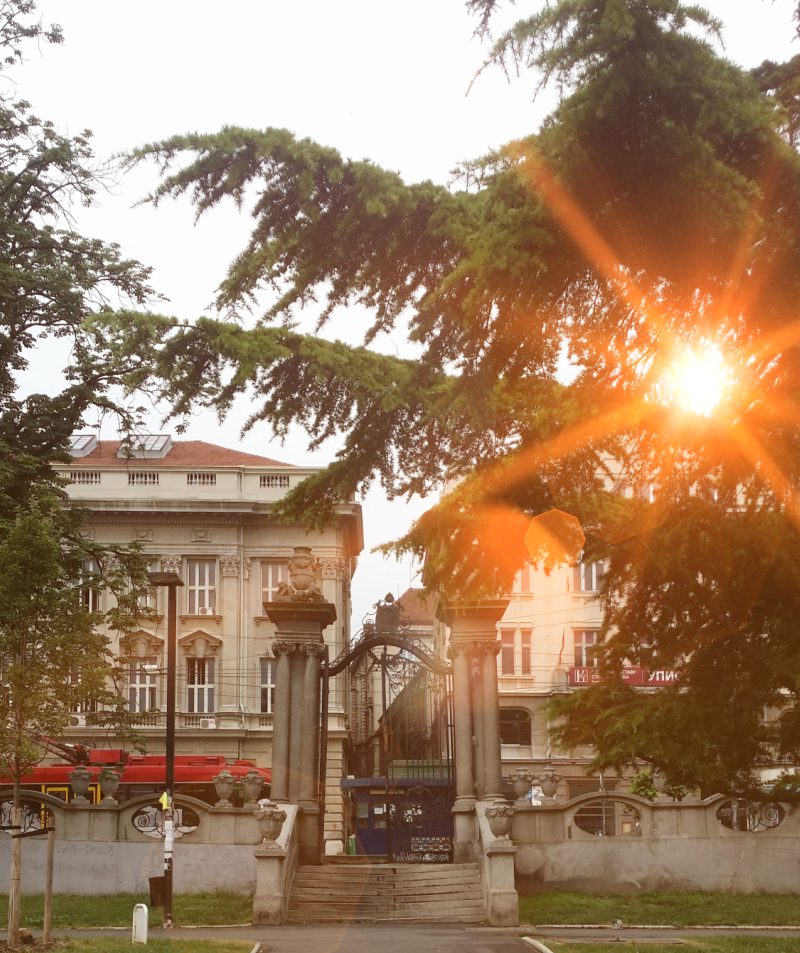