(apartment for a) Day in Balkanska

If you happen to be one of those adventurous spirits of the developed world that have picked the shabby and gritty capital of our increasingly failing state as their holiday destination, it’s very likely that you’ve explored the history, culture and habits of the locals in an unbiased tourist guide. Since fubar cities of Eastern Europe still seem to have an awkwardly high percentage of people who are extraordinarily eager to smother a random English speaking foreigner with endless tales of history (which usually turn out to be utter incoherent bull), we have decided to jump on the bandwagon. Our series Belgrade Apartments for a Day in…? is aimed at invoking condescending interest of the visitors into short stories about the places where we put our guests, and share a bit of Folksgiest and local knowledge in the process. If you don’t feel like plowing for sense in these semi-random ramblings, but just need an apartment in Balkanska, proceed to the apartments home page immediately.

…and whenever one begins a topic with a few words on etymology, you can be sure that they are either one or the other:

1.rather studious and find a hidden meaning in the intricate ways that cultures give names to places, things and qualities surrounding them

2. completely clueless and try to mask the fact by fluffy irrelevant but compelling ramblings that everyone can relate to…

For the case in point, the reasons for etymological introduction are equivocal. When prospective readers bump into this writing we would like to give them a bit more on what this street means for Belgrade – and that’s where problems start because this meaning seems to be eluding us. Hence, etymology…

Wikipaedia says that the name comes form the Persian word balkaneh – which means a mountain. Prior to Turkish conquest of the whole peninsula, the area of almost 667000 square kilometers was known as Helm. The Turkish name became domicile, to the extent that our Bulgarian neighbours actually use the word to designate mountain. The interesting coincidences that Balkanska is one of the steepest inclines in Belgrade.

This path into the heart of the city has long had a symbolic meaning as well. It used to be the main thoroughfare from the Railway station to the city center. Some writers (we don’t know which) have made this uphill walk into a metaphorical first meeting of the newcomers with the big city. Certain Ms Dedich has even built a successful TV career on this worn out myth. Today, the only people who still use it are the ones unacquainted with the public transport routes or those who have a dwelling there.

Its name turned out to be quite fortunate. Balkan epithet seems to have been equally convenient for the great variety of city authorities, so Balkanska stands tall in the group of just thirty streets in the city center that haven’t changed their name since 1872.

In its beginning Balkanska was known as an artisans hub. The saddlers, blacksmiths, leather smiths and later on, photographers have gradually went into history. It’s a shame that the same cannot be said of the cobblestone in the lower part of the street, which still tests the endurance of suspension of many aged vehicles of the capital.

According to Mr Trifunovich, Balkanska was home to a number of other highly romanticized places which are long gone. One of them, which has literally vanished was Index Bar – one of the first undergound rock’n’roll clubs that used to be in the basement of number two. This space is now the grounds of the first smart building in Belgrade and a lovely accommodation option for loaded upstarts. Luxor cinema, which was named “20th October” after WWII, was the only cinema in ex-Yugoslavia ever to become a target of a terrorist attack. The unpleasant event of the elusive summer in 1968 has turned the cult spot for B production westerns fans into a cult spot for C production soft porn fans…unfortunately, even that could not save it from demise. There was also a legendary shack next to the prestigious Hotel Moscow which was one of the first fast food joints in Belgrade – At Leskovchanin was a place with great hamburgers. You can still get one there, but the recipe is quite probably different. The image from Google maps really captures the authenticity of landscape, Balkanska is a fine metaphor for changes that took place in the city and even finer mish/mash in architectural terms is just across the street

Smart people, as far back as ancient Greece, have said that the only thing that is constant is change itself. Without trying to minimize the shortsightedness of those who think they’re the first to walk the Earth, Balkanska today is a place of amazing contradictions and new identities of our weary capital.

Lamentation over times past has been one of the favourite national pastimes. In kafanas, it is as established as blathering about daily politics and as impervious to logical reasoning. Voices of nostalgia have been more than persistent in mentioning how children will never be able to ride a sleigh down Balkanska street, but given that Belgrade hasn’t had a decent winter in more than a decade, and that there are almost no underage full time residents in the street itself (the infants from GAC and juniors from Tesla and Math Grammar school in the neigbourhood don’t count) its departure into oblivion seems quite rightful.

This brings us to the question – what’s actually left to do in Balkanska, to those who visit it in 2015? Well here’s our modest selection:

1. Although you won’t find this one in tourist guides, its value is attested on a daily basis by the queues of high-schoolers during class breaks. At Andjelko’s is a bakery where burek has kept the distintc taste for almost hundred years. If you’re up for a proper breakfast of champions (of cholesterol) pay these gents a visit. Some pilgrims travel all the way from Zemun to grab Andjelkos Burek so…

2. As we’ve mentioned previously there’s not much left of the artisans hub, but those who are still there are there for a reason. From half a dozen hatters, the entrepreneurial spirit of Mr Andjelkovich has gone to greatest length. The family business spanning over three generations has kept pace with time and became a damn fine brand (Tu-Tu hats) which now belongs to the prestigious bits of High Street. The shop in Balkanska, where it all started still rocks.

All in all that bit of Balkanska is a small Hipster paradise. 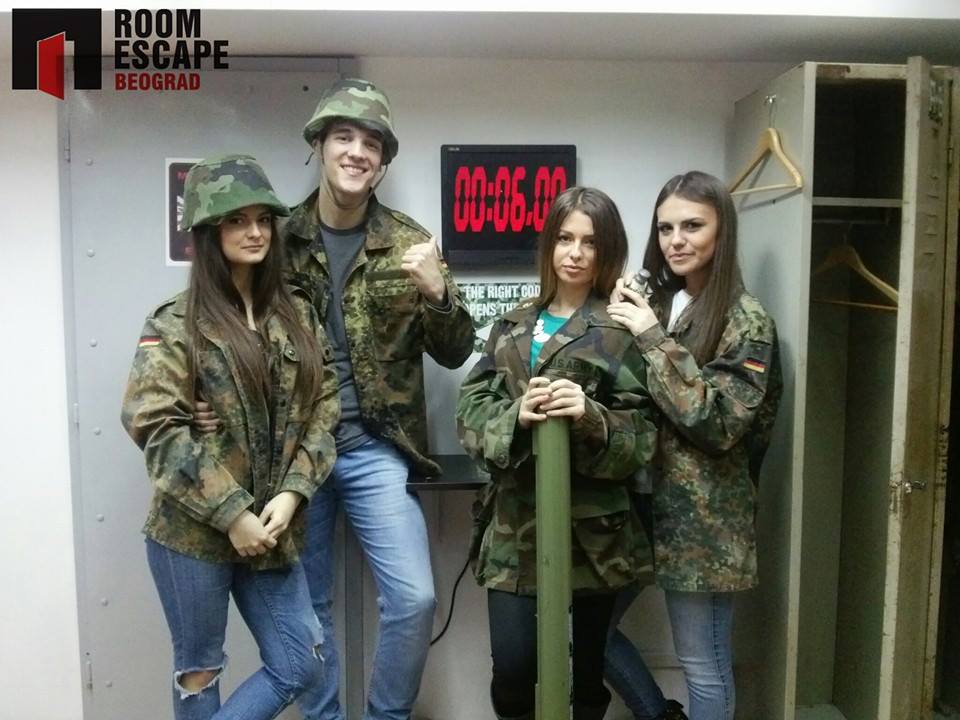 3. Saving the world! We kid you not. Escape the room concept , that is a game where participants try to solve a series of puzzles and secret codes in real space. Balkanska hosts two such facilities – a bunker where the team is supposed to resolve a nuclear catastrophe and a escape from a prison cell. Once you split the 4000 dinars bill into five people you get actually get quite a bit of fun for not as much money.

4. There’s a traditional (read Turkish 😉 confectionery at the bottom of the street, but of you’re keen on trying home made candies, there’s an actual Candy Makers shop in the nearby Gavrilo Princip Street. There are no more kafanas in Balkanska street but if you’re fond of low quality beer feel free to visit the brewery in the cellar of Hotel Prague.

5. Although winds of history are banging on the doors of mobile phone repairers, there are still a couple of service shops in Balkanska that may put your unruly gadget back to function

6. The last but possibly most important for all of you staying in the apartments or generally travelling is at the bottom of the street – a leather specialist specializing in handbag and trunk repairs.

In spite of the its conspicuous decrepitness, Balkanska is a street with much to offer. And so we get to our punter – apartment BALKAN. This serviced apartment is a fine specimen of our affordable decency for anyone looking for short term accommodation in Balkanska

BALKAN is a one bedroom apartment in the heart of Belgrade with a humane and practical structure. A spacious hallway connects four rooms into a nice whole.

The living room has an excellent L shaped sectional covered in wenge plush and bone white eco-leather, with adjustable headrests. It fits into the corner of the room perfectly. The ergonomic, leaf-shaped chair, enhances the arrangement and makes the room nice and comfy for five people. The custom made work desk provides enough space for two people and next to the TV stand are two nightclub-cube-ottomans, should anyone else decide to join.

The bedroom is slightly more plain in appearance, but nevertheless practical. Inside it, there is a five door wardrobe with lots of drawers, and two beds. One of them is a queen sized double with a chroumium frame, and the other is slightly more modest, with wooden frames and placed in the corner of the room. Two two nightstands are shared between them and the third piece which has purely decorative purpose may be used as a dressing table as it’s right underneath a large mirror.

On the far end from the entrance is a structurally unusual, but extremely practical bathroom. The two parts of it (toilet and the washing area) form the shape of a capital Latin letter L with a large shower cabin at their meeting point. The soothing and noble nuances of blue, permeated with small mosaic shaped tiles with silhouettes of sea weed make a pleasant ambiance to lay a brick. The broad shower cabin has a hydro-massage mechanism to please even the most demanding bathers and the cute washbasin is placed so that even small children could wash their hands in it.

Opposite the living room is an arched entrance (with halogen bulbs in the arch) into a modest kitchen with the adjoining dining area. When we say modest – it refers to its dimensions – the wall cabinets and cupboards pack everything that may be necessary for preparation and eating food. The electronic stove has two heating rings and a range hood which ensures that the scents don-t spread throughout the apartment . The dining space is rather pleasant – a nice glass table for four and high back chairs that can serve as a salon for certain guests as well – especially if they happen to be smokers. The pantry is right next to it and it hides a nice view over Pajsijeva street.

The gentle crackling of the parquet and ceilings of slightly above average height (for Belgrade terms at least, give BALKAN a genuinely homely note. BALKAN is not a luxurious abode, but it’s high above the expectations one might have from cheap. There are no glittering or overtly decorative elements – the calming colours spread the warmth and congeniality. With a 5 euros per day surcharge you get a parking spot in the nearby garage which, given its location is quite extraordinary.The price which starts at standard 10 euros per person, gets progressively lower with the length of your stay. The furnishings that blend the old and new are also standard. getting all that in the location that is close to everything worth seeing is a bit above standard. The conclusion kind of sets itself – BALKAN is a fine choice of an apartment for five people, and Balkanska is a fine base for all that you might need in the center of Belgrade.

Categories(Apartment for a) Day in...? English